Rasa uses machine learning to make predictions about the users' intent as well as the next best action to take. These machine learning pipelines need to be configured in your config.yml file.

There are different types of components that you can expect to find in a Rasa pipeline.

The main ones are:

Let's discuss what each of these types of components do.

The first step in a Rasa pipeline is to split an utterance into smaller chunks of text, known as tokens. This must happen before text is featurized for machine learning, which is why you'll usually have a tokenizer listed first at the start of a pipeline.

Once we have tokens, we can start adding numeric machine learning features. That's what featurizers do. The diagram below shows how the word "Hi" might be encoded.

There are two types of features in Rasa:

Rasa applies these featurizers to all of the tokens but it also generates features for the entire sentence. This is sometimes also referred to as the CLS features or the sentence features.

Even though DIET is capable of learning how to detect entities, we don't necessarily recommend using it for every type of entity out there. For example, entities that follow a structured pattern, like phone numbers, don't really need an algorithm to detect them. You can just handle it with a RegexEntityExtractor instead. You can also consider adding a DucklingEntityExtractor or a SpacyEntityExtractor if it fits your use-case.

The pipeline in Rasa is a system that can turn an utterance, like "Book a flight from Berlin to SF", into structured data shown below.

Given that we now have our intents and entities, how can we predict the next action?

When Rasa is predicting an action, it's doesn't just look at the current intents and entities. It also looks at the conversation so far. 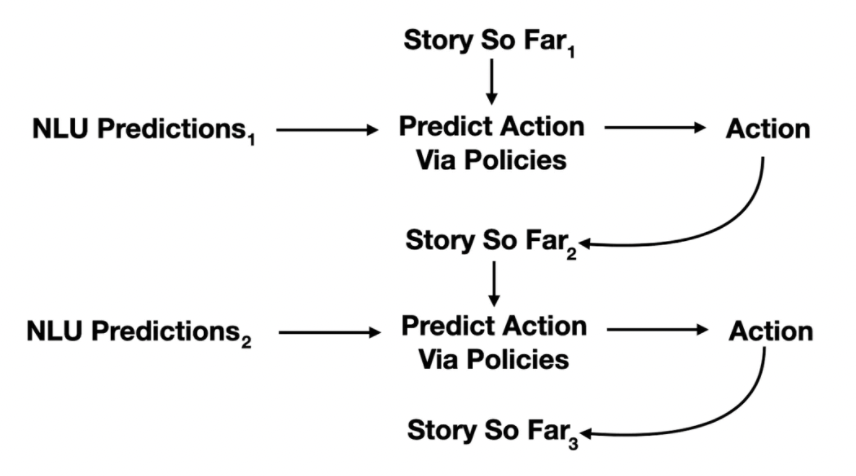 Rasa uses policies to decide which action to take at each step in a conversation. There are three main policies that the default config.yml file starts out with:

The detault priority in Rasa is:

The reason why the RulePolicy and the MemoizationPolicy have a higher priority is because they are directly based on input from the designer. Rules and stories that have been added are meant to be seen as examples of how conversations should go. The TEDPolicy is a policy based on machine learning, which will try to generalise so that we can handle conversations that aren't defined in our stories.yml and rules.yml. Although it's great to have the ability to go beyond our own rules, we can usually trust our domain knowledge better than the statistical approximation of a machine learning system.

The RulePolicy allows you to impose strict rule-based behavior on your assistant.

The policy will check for rule definitions in your rules.yml file and will apply those. You can see an example of such a rule below.

The MemoizationPolicy is applied whenever the current story is similar to a pre-existing story.

For example. If this was the story so far.

Then the MemoizationPolicy would be able to kick in if it was trained on the following story.

In this case the MemoizationPolicy would predict that the utter_ask_userid is the next action to take.

The Transformer Embedding Dialogue (TED) Policy is a multi-task architecture for next action prediction. It uses features from the current conversational turn, as well as some of the past turns, to make a prediction on what to do next. If you're curious about the details it is explained in full detail in our paper and on our YouTube channel.

In general we don't recommend tweaking the hyperparameters when you're just starting out because your first priority is to acquire a representative training set. Once you have one though it might make sense to tune the max_history parameter of the TEDPolicy component.

Rasa provides many components that you can use to build your machine learning pipelines and we've only scratched the surface of what's available in this section. In general we really advice not to prematurely optimise your system but we do want to emphasize that Rasa also supports many components for Non-English pipelines. You're also able to build your own components in Python if that's of interest.

Try to answer the following questions to test your knowledge.