You may have been planning for a form using a diagram like below. 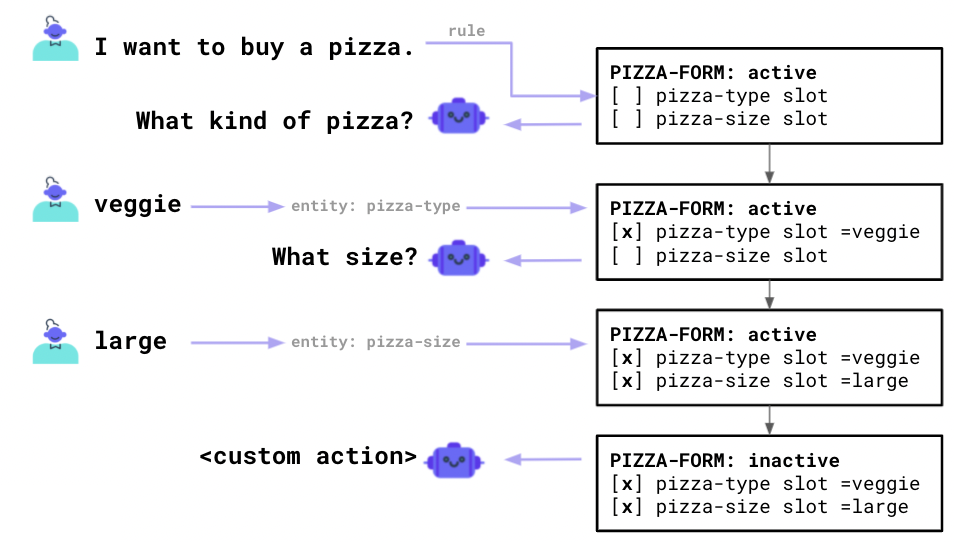 But a form also needs to be robust against unhappy paths. We may be dealing with a user who is asking for clarification while they're providing the assistant with information.

Whenever this happens, you'd like the assistant to answer the prompt, and afterwards fall back to the form.

So let's discuss how to configure Rasa forms to deal with this.

We will share code snippets below. But we also have a Github repository with the entire Rasa project. If you'd prefer to explore the code that way, simply go to the repository here.

That said, let's begin by adapting our rules.yml file.

The idea here is that we can add rules that are able to handle an "interrupt" that occurs from within a form. In this case, once the utter_iamabot response is sent, control is given back to the form loop.

Normally, a form would shut down automatically once a user has given all required slots. But what if the user was to stop a form prematurely? In that case we need to think about ways to deactive the loop of a form.

Let's try to implement this behavior, following the diagram below.

To implement this behavior, we need to resort to stories.

There are a few things to take note of here.

If you're trying to build these flows, we highly recommend using the rasa interactive command as a way to get started.

To show how flexible Rasa forms are, we're going to take our form a step further. What we're about to show is an advanced use-case though, so don't worry if you feel the need to re-read parts of the tutorial.

The idea is to make a form that uses buttons to ask questions that can also change it's behavior depending on the information that it has received. In particular, we'll start the form by asking if the user is interested in a vegetarian pizza and we'll show different options later in the form depending on the answer.

We'll make a new fancy_pizza_form that facilitates this. That means we'll first need to make changes to the domain.yml file.

With our domain.yml set up, we now get to make a custom actions that will ask the user for information on our behalf.

These custom actions act as responses that can also handle logic on our behalf. In particular, note how the AskForPizzaTypeAction sends a different message that's based on the vegetarian slot.

It's also good to observe what the payload of all the buttons contain. The idea is the when a user hits a button with the payload "fungi" that Rasa will accept it as if the user typed "fungi" in the dialogue box. If the payload starts with a backslash, like in "/affirm", it'll be interpreted as an intent instead.

Our fancy_pizza_form still needs a validator. It's defined below.

If you're interested in experimenting with this we recommend that you use rasa interactive. That way you're also able to inspect the slot values as the conversation moves forward.

You're also free to copy the code from our repository here.

Try to answer the following questions to test your knowledge.